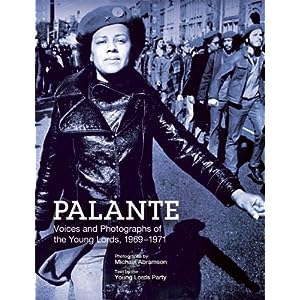 Perhaps I order too many books, which Is probably an occupational hazard for folks in my line of work. As such, I often don’t pay close attention to emails with the subject line “Your Amazon.com order has shipped.” Today, I’m glad that I looked because my copy of Palante: Voices and Photographs of the Young Lords, 1969-1971 is on its way. This re-release and re-naming of the 1971 Palante: Young Lords Party, which has been out of print for a long time, adds an introduction by Iris Morales, filmmaker and Young Lord, and promises to be a great addition to the resources available on the organization. So why should you care? Here are a couple of reasons.

Palante has always been one of the most comprehensive resources on the Young Lords. Released in 1971, it was a key means by which they spread word of the organization’s history, ideology, attitudes toward key issues (like women in the revolution), etc. The first half of the book was a collection of programmatic statements from/about the organization and first-person narratives, testimonios even, recounting how different members (cadre and leadership) “turned political.” It also included pieces speaking to issues such as colonialism, women’s equality, gay liberation, and racism. The second half of the book was an extended photo essay by Michael Abramson, which had some of the best photos documenting the Young Lords’ activism. Sadly, it has long been out of print. Worse yet, many libraries had their copies lost or stolen over the years, so it’s gotten hard to find this excellent primary text.

This new edition of Palante, published by Haymarket Press, promises to be everything that the original was and then some. The addition of a new introduction by Iris Morales adds a contemporary dimension to this forty year old text. Iris Morales and Denise Oliver wrote the preface to my Young Lords: A Reader, which really helped to bring into focus the significance of the organization for a contemporary audience. While I haven’t yet read the new introduction, I’m confident it will be fitting to the book, which was already great.

If you’re already interested in the Young Lords, you probably don’t need much additional reason to get the book (in fact, you’ve probably pre-ordered it). If you don’t know a lot about the Young Lords, why the heck not??? The Lords were one of the most significant radical Latin@ organizations of the post-McCarthy era. They were responsible for significant advances in Puerto Rican communities on issues of health, education, drug abuse, political empowerment, prisoner’s rights, police brutality, and more for a wide cross-section of working people of color. If you have any interest whatsoever in Latin@ social movements, black and brown power, the radical 1960s and 1970s, coalitional politics, the Left, Third World feminisms, etc., you should get this book (and mine too, of course).

Even if you don’t have a huge interest in these topics, the photos alone make Palante a great conversation piece for anyone who happens to flip through it. For $15 from Amazon.com, it’s hard to justify not getting this book. 😉

I’ll be waiting (impatiently) for my copy to arrive tomorrow or Wednesday. Once it does, I’ll post a short review of the book quality and the intro for those of you still on the fence. If you get your copy before me, please weigh in here in the comments.